Seven in every 10 children (69%) in the UK say that they currently play a musical instrument – a considerable increase over time compared with previous ABRSM research (see Fig 25). Of these, just over half are currently taking instrumental lessons.

It is worth noting that the phrase ‘play a musical instrument’ will mean different things to different children. So this statistic will encompass everything from children playing simple percussion at a basic level to those learning and working towards their Grade 8 exam.

An encouraging 85% of children have played a musical instrument compared with 74% of adults. More children have had instrumental lessons too (62%) compared with fewer than half of adults. The proportion of adults who have not played an instrument steadily increases with age, rising from 8% at 18 to 20 years old to 38% at 65 years and over (see Fig 15). This suggests that much progress has been made in recent decades in giving people access to instrumental learning opportunities.

More remarkable still is the number of young people who self-identify as playing an instrument but state that they have never had lessons; some 21% of children who play are therefore learning through informal routes such as peer-to-peer networks, by accessing digital tools, or by being self-taught in other ways. There is also a possibility that these children may have played an instrument in the classroom, but did not identify this as being an instrumental lesson.

The number of child learners who say they have never played stands at 15%, with more than a third of respondents claiming never to have had an instrumental lesson.

Children, on average, start playing at 7.6 years of age but of the 16% who have stopped playing, they have done so by the age of 11.1 years. By the age of 16 to 17, almost a quarter of young people have never had an instrumental lesson but 97% have played an instrument. Music has increasing significance as young people develop but non-formal routes appear to be as important to them as formal ones.

Whilst the regional response base is low, the data points to significant geographical variations, with almost half of children in Wales who responded (47%) stating they had never had instrumental lessons (see Figs 21 and 22). Less than a third of child learners in Northern Ireland currently have lessons compared with more than half of respondents there who stated they used to but no longer have lessons.

While broader social, economic and geographical factors play a role here, we need to identify ways of improving the musical engagement and learning opportunities of young people from more deprived backgrounds3. The majority of children are taught in school in a group (58%) but almost half of children having private or individual lessons (at school or elsewhere) are from AB backgrounds.

‘Every aspect of making music makes me happy’
– A learner responding to what they enjoy most about making music.

Almost 30% of children (and a quarter of adults) who have never played an instrument, identified the financial expense of learning as a barrier (see Fig 19). Furthermore, 40% of children from DE social grades said they had no opportunity to learn at school. Cost (a factor also identified by teachers as a barrier) is clearly a disincentive to instrumental learning (see Fig 45 and Fig 56).

The primary reason children and adults stop learning is lack of interest in playing as well as competing pressures from school, work and other activities (see Fig 18). This also correlates directly with the main reasons teachers cite as barriers to musical progression and continuation (see Fig 54).

The survey clearly shows that adults who have had private lessons or taken a music exam are much more likely to continue playing an instrument – and that the higher the grade achieved the more likely they are to continue (see Fig 24). This implies that music exams offer a positive route to progression and continuation. 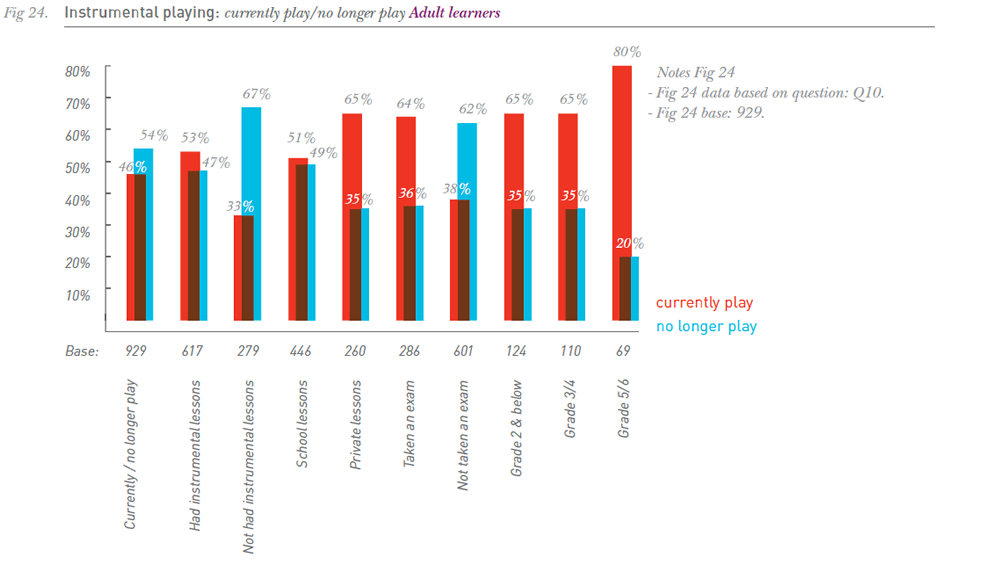 3 This may relate to a school’s emphasis on music or to opportunity if parents are required to contribute financially.